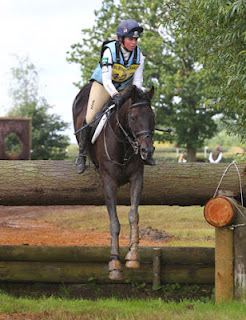 I had High Havoc doing the Advanced and Bonne Amie and Persimmon doing the Open Intermediate.

High Havoc was having his first run in a while as he had a short holiday after Badminton was cancelled and then preparation events leading up to Aston were cancelled! However this did not affect his performance at all. He did a lovely test in conditions that I really felt wouldn’t help him as he is not too keen on the mud!! He lacked a little bit of expression as he struggled to get his toes out of the wet ground, but he was very accurate and relaxed. He scored a 27.9 and led his section.

We went back the following day for the two jumping phases. The show jumping was moved onto the surface which I think all the riders were very grateful for as the ground was pretty wet and boggy. High Havoc jumped a lovely clear show jumping and then flew round the cross country. He coped remarkably well in the tricky conditions and didn’t let them affect his jump or gallop at all, he posted a fast enough time to win his section comfortably. I was thrilled with his first run back for a while and am looking forwards to his Autumn campaign.

Bonne Amie did a super test, but got a little stuck in her mediums and broke once which was a shame, she scored a  competitive 30. She then went on to jump a lovely clear in the show jumping and a good clear cross country. We went reasonably slowly as she is being aimed at Hartpury CCI**.

Persimmon also did a great test, but did have a couple of teenage tantrums which was a shame as the rest of his work was stunning! Even which a couple of disagreements he still managed to score a 29!! He then jumped a lovely but steady double clear and finished just out of the placings.