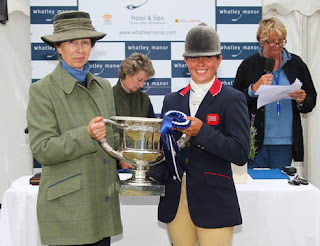 I had Bonne Amie doing the Open Intermediate, Mo Cuiske, Mad About U and Ceylor LAN doing the Novice and Persimmon in the CIC**

Bonne Amie did a lovely test to score a 30.5. She jumped a beautiful clear in the show jumping and felt great. The cross country wouldn’t be her favourite type of track as it is quite twisty, but she listen and jumped very well and finished with just a few time faults for 7th place in a very competitive section.

Mo Cuiske fresh from his run at Pontispool on the Monday went very well again. He did a very nice calm test, not quite as good as his one on Monday where he scored a 26 but I thought it was still a good test. So I was very shocked to see he had scored a 42!! Even when he has been a little on the naughty side he hasn’t scored that badly! We put our bad score behind us and Mo Cuiske jumped a very classy double clear.

Ceylor LAN was doing his last Novice run of the season and he made it a good one. He did a lovely flowing test to score 29.5 and then went on to jump his best show jumping round to date and produced an immaculate clear. He then jumped a great, but steady clear cross country to pick up a few time faults and finish 4th.
Watch our cross country here:
﻿
Mad About U was doing his first Novice since his nasty virus in the summer and he didn’t disappoint. He did a very smart test to score 25.5 and led his large section after this phase. He then put up a foot perfect show jumping round and jumped a great clear. As he is only five and didn’t run him too quickly cross country and he picked up a few time faults, however due to his great all round performance he still won his section comfortably!!
Watch some of his performance here:
Persimmon was a super star again!! He won is third event on the trot and his third CIC** this season at Gatcombe. He did a very nice test with no real mistakes and scored a very competitive mark of 37.2 which put us in 2nd place going into the jumping phases. Persimmon was a little fresh and spooky in the show jumping, but still managed to jumped a faultless clear to put the pressure on the leader Lucy Jackson. Lucy also went clear show jumping but I heard her go cross country before me and she picked up 0.4 of a time fault which put her 0.1 behind Persimmons score so I knew we had to go clear inside the time if we wanted to win the Whatley Manor sponsored spa break. Persimmon flew round the cross country and finished one second inside the time!! So won the huge section by just 0.1 of a mark ahead of poor Lucy.
Watch our performances here: