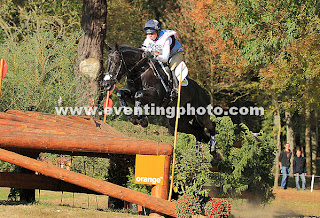 Persimmon having only started eventing this year did fantastically well to be one of only three British horse’s selected to compete in the six year old championships. He was early to go on the Thursday morning and did a lovely test and coped very well with such a big arena, he scored a 51 which I was a little disappointed with. This left him in equal 3rd over night and in equal 9th after the second day of dressage.

He then flew around the cross country on the Saturday morning and did a lovely clear inside the time round a tough and technical track. Sunday morning dawned and Persimmon was nice and bouncy and not at all tried after his exertions. He jumped well, but unfortunately had three down, they were all going towards the grandstand and crowds. He had them all down behind as the crowds worried him and he got tense and tightened his back. He finished jumping well and will have learnt a lot. I was thrilled with his performance and am now really looking forwards to next season with him.

Zidante was competing in the seven year old championships and was a star!! She did a lovely test, she was very relaxed for such a big occasion and was very accurate only making a single error in her rein back. This was good enough to leave us on a 44.1 and in equal third going into the cross country.

The course was very technical and caused a lot of trouble with 32 of the 68 competitors faulting. Zidante was fantastic however and jumped a very grown up clear inside the time to take the lead over night!!

She was again fantastic in the show jumping and really should have finished on her dressage score, but due to rider error she had the first fence down!! I took a little too much canter away from her and gave her too much to do over the spread so she had the back rail behind. This woke me up and made me ride a lot more forward and like my normal self. I think I let everything get to me. I was thrilled with the rest of her round and was over the moon when I looked at the score bored on my way out the arena and realised I had still won even with my error!! As I was busy warming Zidante up I had no idea how the others had jumped and didn’t realise that I had a fence in hand. What a relief and what a way to end the season!!

Zidante really deserved this win as she has been so good and consistent all year so to round it all up with a three day win and becoming the Seven Year Old World Champion is just fantastic for her and all her connections.

Watch her cross country and show jumping by following this link: http://www.youtube.com/watch?v=Q30Z21BHqqg