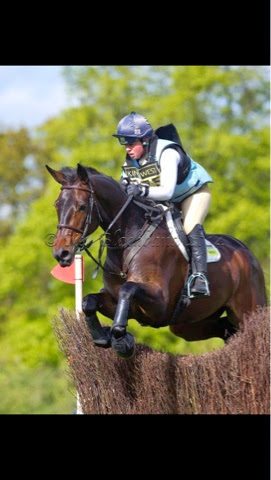 I had Creevagh Cooley doing her first CIC* and Ceylor LAN doing the CIC**.

After only starting her event career this spring, Creevagh Cooley was a little green to be doing a CIC* already, her greenness showed in the dressage which is the phase she is least familiar with. She did some really pleasing work, but also made some rather large errors particularly in her halts, where she wanted to show off her newly learnt rein back skills a little too eagerly!! She scored a 59.4 which left us in 22nd place.
Watch her test by following this link:
https://www.youtube.com/watch?v=c9QjegCtJ1k
The show jumping was causing its fair share of trouble with a lot of horses having rails and time faults. Creevagh Cooley was a star though and jumped a beautiful clear inside the time.
Watch our round here by following this link:
https://www.youtube.com/watch?v=SymstxFQ_IU
She then stormed round the cross country giving me an excellent ride and finished comfortably inside the time. Her two faultless jumping performances rocketed her up the leader board and she finished in a fantastic 7th place. I was thrilled with her and can’t believe how far she has come in such a short space of time.

Ceylor LAN was also a star doing his first full CIC** after I withdrew him from the cross country at Burnham Market. He did a super test and had improved from Burnham Market. He really enjoyed showing off in a big arena and scored a 42.2, this left us in 4th place out of some 90 odd starters.
Like the CIC*, the CIC** was causing a lot of trouble and when we went in there hadn’t been a signal clear. Ceylor LAN made the track feel like a pony club course and jumped a beautiful clear, finding it all very easy.
Watch our round by following this link:
https://www.youtube.com/watch?v=CIvP4jKorqw
He then jumped beautifully round the cross county making it feel very straight forward. I didn’t chase him for the time and we picked up a few time faults which left us in 8th place.
I was thrilled with both the horses completing their first runs at this level and also picking up their Le Lion D’Angers qualification along the way.