The Season Kicks Off at Tweseldon

The season kicked off this week for me at Tweseldown, I had ten horses running there in various different classes. I had High Havoc, Zidante and Boondoggle all in the Open Intermediate. High Havoc warmed up really well for the dressage, but was a little fresh in the arena and made a few silly mistakes, however when he was concentrating he did some lovely work and scored some high marks. He finished with a 29.1. He show jumped well, but had an unlucky fence down going down hill. The ground was a little tacky, which wouldn’t be his favourite but he coped well. He then did a super clear cross country, we had a few time faults as I didn’t want to push him and finished in 3rd place.

Zidante was also a little fresh in the arena and had a little leap about in her medium canter! The rest of her work was very good and she finished with a 27.7. She then jumped a beautiful clear show jumping and was loving being out on the grass, she definitely had wings!! She then jumped a very nice confident clear cross country, she was pretty feisty, it was great to know she was enjoying it all so much, again though I didn’t go too quickly as it is still very early in the year. This however was all good enough for 2nd place.

Zidante-with thanks to Lulu Kyriacou Media and Photography

Boondoggle did a good test as well, but he to was pretty excited to be out and about and made a few silly mistakes so scored a 33.2. He then jumped a lovely clear in the show jumping, which I was thrilled with as he normally comes out a bit rusty at his first event. Cross country didn’t quite go to plan however, he was very pleased to be out and quite fresh to ride! He jumped well but had a very silly run out at a corner after spooking at a bridge that you had to cross just before it!!

The novice horses all went well. Alive a new ride for the season went very nicely. She did a good test and scored a 27.5, she then jumped a lovely exuberant clear in the show jumping and was fantastic cross country. I had a few time faults as I’m still getting to know her, but this was all enough for 4th place.

Alive-with thanks to Lulu Kyriacou Media and Photography

Persimmon was running HC as he is over qualified for this level but I wanted to give him an easy start to his year before going Intermediate. He did a lovely test and scored 25, he then had a silly fence down as he found it all a bit small!! I then just took him for a steady canter round the cross country, he jumped a lovely confident clear.

Bonne Amie was in the Open Novice and was the feistiest of the lot in the dressage, she was very happy to be out!! She scored a 35, but made up for it in the jumping, jumping a lovely steady double clear.

Bonne Amie-with thanks to Lulu Kyriacou Media and Photography

The BE100 horses all went really well with all four of them finishing in the top ten! Ballinagore Black did a lovely solid performance in his test and scored 30.5. He then had one down, going don hill in the show jumping which was a shame. But he flew round the cross country inside the time to finish 9th. Watch him through the water by following this link:
http://www.youtube.com/watch?v=bSS9RSHskOc&feature=youtu.be

Anxiom who is a new ride this year and was running in his first ever BE event excelled himself. He did a lovely test, with a couple of green errors and scored a 30.5. He then jumped a super double clear inside the time and finished on the same score as the 2nd placed horse but we were quicker cross country so finished a very pleasing 3rd! 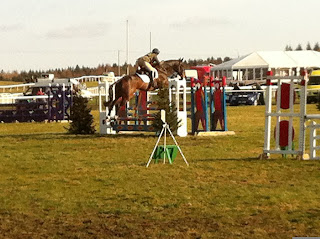 Ceylor LAN is a lovely new five year old and was competing in his first BE event as well. He did a super test, with just a couple of baby mistakes, like calling to everyone to tell them how clever he is!! He scored a very good 27.5 which was the second best in his section. He then jumped a lovely clear in the show jumping and was brilliant cross country. I took him a little steadier than the others as he is quite big and babyish and was struggling a little with all the twists and turns, so we had 3.2 time faults and finished in a very pleasing 3rd place. Watch our dressage and cross country by following these links: http://www.youtube.com/watch?v=yjqpMTRzOzM&feature=youtu.be
http://www.youtube.com/watch?v=ir6Urw0PkUE&feature=youtu.be

Mad About U who competed last year in some BE90’s as a four year old was doing his first BE100. He was a star and did a 26.5 dressage and a smashing double clear in the time to finish 2nd, just 0.5 behind the winner!!

So on the whole a very pleasing way to start the year.