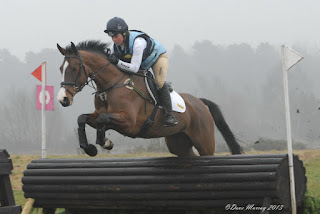 At Tweseldown I had Caeleste and Togo De Kerser running in the BE100 and Persimmon and Zidante in the Open Intermediate.

Caeleste was a star, she was far more settled than at her first at Aston. She did a much better test, there was still a little tension and plenty to work on, but she did some lovely work and scored a 28.5. She then jumped a great clear show jumping and was fab cross country and was the only horse inside the time in her section. After leading the dressage and her two classy jumping rounds, she won her section convincingly.

Togo De Kerser also did a much improved test, he was more to the contact and connected. He scored 29, to sit just behind Caeleste. He jumped a lovely round in the show jumping and was unlucky to have one down. He was then great cross country and finished in 8th.

Zidante was her normal super self, she was very pleased to be out again. I was thrilled with her test which she did in pretty deep and testing ground, she coped very well with the conditions which surprised me as she used to hate the mud. She was relaxed, accurate and swinging, so I was rather disappointed with a score of 30. After a lot of rain in the morning the show jumping had got rather muddy and deep, but Zidante jumped her socks for a lovely clear, she then pinged round the cross country. She really enjoyed herself and it was great to be competing her again. We had a few time faults as we were going for a nice quite run, but this was still good enough for 3rd.

Persimmon did a great test to score 26.4 and led his section, he didn’t seem to notice the mud and didn’t let it affect his impressive paces. The ground in the show jumping had unfortunately deteriorated further since I had jumped Zidante. Persimmon jumped a great round and tried his heart out in the mud, he was extremely unlucky to have both parts of the double down, which was the last fence! He really didn’t deserve to have them down, but I was thrilled with how he jumped. He then jumped a lovely, but steady clear round the cross country and finished in 8th place.

I was back to Tweseldown on Friday with two Novices, Mo Cuiske and Ceylor LAN. Unfortunately after furher heavy rain the ground had really cut up. Mo Cuiske did a good test, coping with the tricky conditions well to score 30. We went down the the show jumping warm up, but the ground had got extremely deep, especially on the take offs and landings, so Mo Cuiske’s owner and I decided it wasn’t worth risking him this early on in the season. I also decided it wasn’t worth running Ceylor LAN as he is a lovely young horse. Due to the conditions I didn’t return on the Saturday with my final two BE100 horses as they are young and didn’t need tough runs at this point in the year. It was a real shame, but we all live to fight another day!