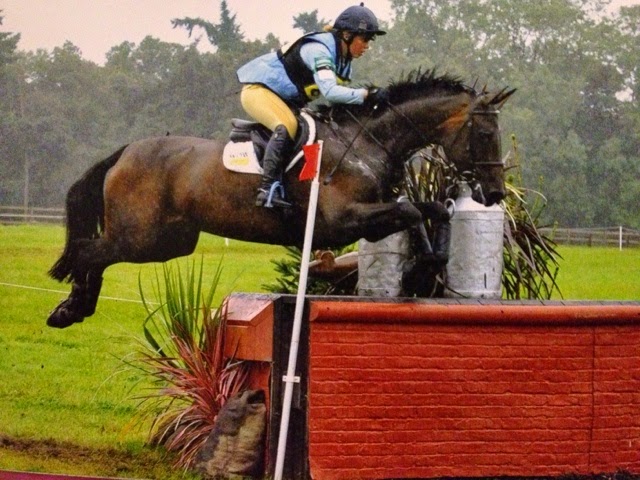 I had six rides at Wellington, Acis and Cooley Delta in the BE100, Vendredi Biats in the BE100+, Creevagh Cooley in the Intermediate, Mo Cuiske in the Open Intermediate and Persimmon in the Advanced.

Acis was a star and is improving hugely all the time, he did his best test to date and although still struggling a little with his size in a small arena he did a lovely test and scored 28.
Watch our test here:
He then jumped a lovely confident clear round the spookiest track he has seen.
Watch our round here:
He then gave me a very grown up ride round the cross country and found it all pretty easy. He finished on his dressage score to come 2nd.
Cooley Delta who is still rather green did her best test to date and scored a 32. She is still very weak so I have high hopes for her when she strengthens up.
Watch our test here:
She show jumped very well, but was extremely unlucky to have the first fence down. The filler was low down and she just dropped her head to look at it and just caught the top rail in the process which was a real shame.
Watch our round here:
After being extremely green in her first run at Smiths Lawn and a little green still at West Wilts I was delighted with how she had improved. She jumped very confidently the whole way round, including the direct route into the water which was causing trouble. She finished inside the time and in 9th place.
Vendredi Biats coped very well with his first Novice test. As he is only 5 and still a little unbalanced on grass I couldn’t show his medium trot and canter off as well as I would have liked, in a small arena and with a baby by the time you get into medium it’s time to come back!
Watch our test here:
He then jumped a lovely clear in the show jumping and seemed to jump even better round the bigger track.
Watch our round here:
He then flew round the cross country and found it very easy. He finished on his dressage score for 2nd place in his first BE100+.
Creevagh Cooley was super in her second intermediate. She still struggles a little in a small arena, but did as good a test as she can at that level and for her age. She scored 32.3, which left her up amongst the top few.

She then jumped a lovely round in the show jumping and was very unlucky to have one fence down when she caught it behind, I think she got a little distracted by all the trade stands.

She then flew round a tough intermediate track and gave me a brilliant ride, I just can’t believe she is only six as she didn’t feel green in the slightest! We picked up a few time faults, but this was still all good enough for her to finish in 4th place.

Mo Cuiske was a little on the feisty side after two quick runs at Aston and Somerford. He did a nice test but wasn’t as rideable as he can be and scored 33.2.
He then jumped really well in the show jumping and seemed to be really enjoying the mud, he was extremely unlucky to have one down.
After feeling a little on the fresh side and not in the most competitive of positions I decided to give him a quiet run round the cross country. He jumped round really well and finished nice and relaxed.
Persimmon was the star of the weekend. He did a lovely test in the 8 and 9 year old advanced section, he made one error in his walk to trot transition when he misunderstood me and went into canter so that lost us a couple of marks. Due to the high quality of the rest of his work he scored one of the best marks of the section a 29.1.
By the time we went to show jump the rain had made the ground rather soggy and the track was causing a lot of trouble. Persimmon jumped his socks of though and felt fantastic. He jumped a brilliant clear and didn’t seem to notice the mud at all.
Like the show jumping the ground on the cross country was pretty wet, but Persimmon seemed to relish it. He gave me the most fantastic ride cross country and was near on foot perfect everywhere. After our blips in his spring three stars I was over the moon to have him back on track and jumping so confidently and enjoying it so much. His performance was so good he won the competitive section by over nine marks! The old Persimmon is back!! 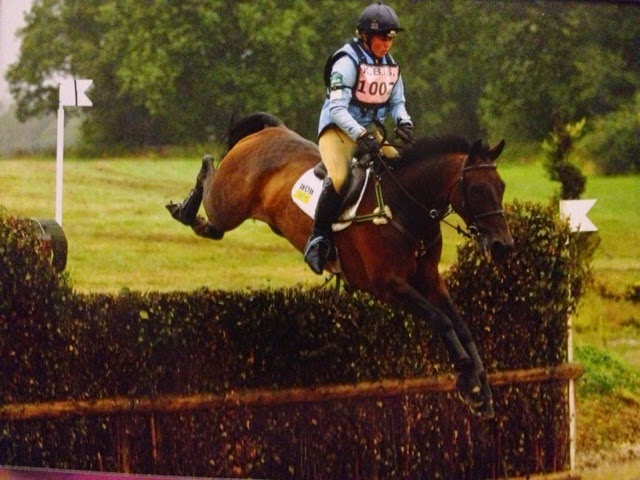 Persimmon flying into the water confidently.